This is an account of my TGO Challenge in May 2010.

I spent the winter languishing on the stand-by list at number 39 until one evening, towards the end of March, when I took a phone call from Uncle Roger and I was IN!

Oh Panic! My route was more or less ready to send off - Mallaig to Lunan Bay. Mostly low level but passing some places that I had never visited and also the Lairig Ghru as a 'high' point. But was I really fit enough?
I started a regime of walking every morning for at least an hour. It was still very snowy in the Alps so we were skiing regularly and I had been able to get in some cross-country days along with a few walks on snowshoes.

Once we were home I walked locally and tried to include some longer more difficult days. I had completed the Challenge twice before, so I didn't worry that I had no time to include any wild camping trips.

At the end of April and for the first week of May we took a sunny holiday in Fuerteventura. This was booked earlier in the year, while I was still on the standby list. So I planned to try and walk every day, to keep up my fitness, but that proved to be difficult. It was one of the windiest and dustiest places I have ever been. The second week my daughter, with husband and small son, joined us, making it even more difficult to get away walking! Fortunately, we managed to avoid problems with Icelandic ash clouds.

Once home, I didn't have much time to get organised.

I dehydrated vegetables, tomatoes, bananas and some lentil stew. I reasoned that simple food was going to be easier to organise so along with the various home dried things I was taking couscous, quinoa, angel hair pasta and powdered mash. I bought some soya protein mince, both savoury and plain, which was light to carry and easily rehydrated. Rolled oats with cranberries and nuts for breakfast and some oaty bars, with a variety of packet soups, completed my food bag. I planned to carry the staples and add to the bag whenever I found a shop on the way. I vowed never to pass by an opportunity to eat at a pub or cafe. 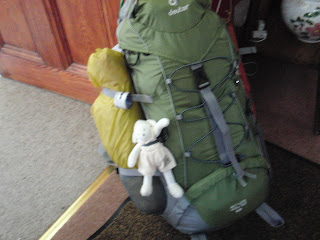 {Bag all packed - Lambie ready to go}
I had planned my route with a start at Mallaig. Him Indoors had kindly offered to drive me over there on the Thursday morning. I had managed to book a room at the Hotel - not cheap but very convenient as the sign out book would be there. And so we set off. 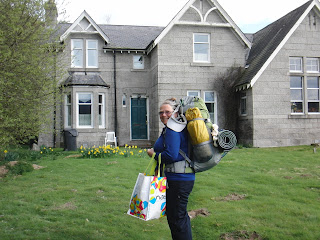 {Off at last}
We made good time over to the west coast, even stopping at Arisaig for a spot of lunch. John dropped me off at the hotel in Mallaig and waved goodbye.

After registering at the reception, and dumping my rucksack in the little room I was given, I set off to explore Mallaig. I needed to buy a notebook to use as my diary, which I found in the local Spa shop. That done I wandered around and down to the harbour to check out the ferry departure for the morning. 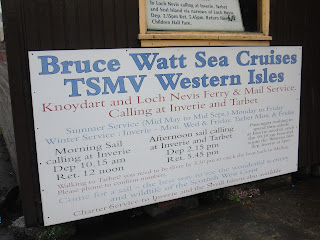 {All the info about the ferry}
I toddled back up to the hotel room and thought about having a wee doze on the bed but instead I set about re-packing my rucksack - after which it was still much the same!
Eventually I went down to the bar and found various folk who looked like Challengers. One of them was Mike Knipe who I'd never knowingly met before but we had communicated by email, and I read his blog, often. We then set out to find something worthwhile to eat and settled on an Italian restaurant where there were other Challengers already tucking in. The food and the company were good.
Diary entry - Thursday 13th May
Bit wet & windy but at least hotel was expecting me. Dumped stuff, went for wander, bought this notebook. In bar later met up with Mark, Mike, Dennis and others. Italian dinner with Mike. Drinks in Bar later. Bed about 11.00. Apprehensive about ferry journey tomorrow, but it'll be fine..... 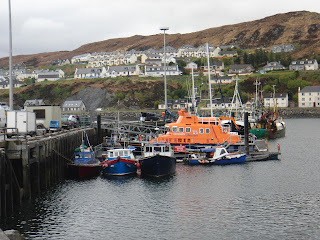 {The harbour at Mallaig}
Day 1
Next morning, had a fine breakfast at the hotel, woman-handled the rucksack down the stairway to reception, signed the TGOC book, and set off for the harbour. I followed a stream of other Challengers down the hill, then to the ticket office, where I bought my boat ticket. We had to wait a while then passed over the rucksacks to the crew, and we were off! 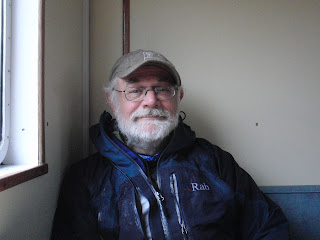 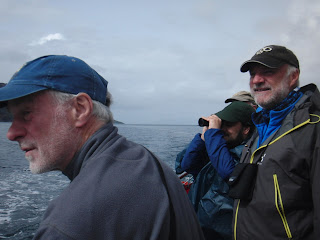 {Life on the ocean wave}
I started the journey in the cabin, but soon went out on deck, both for the fresh air and the views from the boat. I'm not really a very good sailor so I was grateful for flat water! Even the smell of marine diesel can make me feel sea-sick! 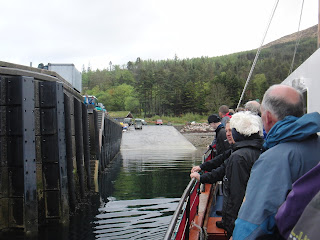 {Waiting to disembark at Inverie}
After a memorable journey, we arrived at the pub in Inverie. I remember having a coffee but I was anxious to get walking. Mike was heading over to Sourlies but we walked together for a little while, until he went his own way, leaving me to walk to Barrisdale. 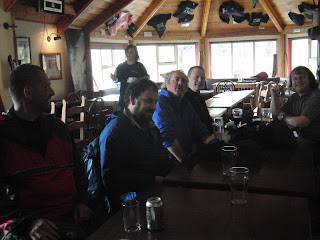 Water beautiful and calm for ferry crossing.with an excited bunch of Challengers on board!
Coffee in pub after landing, then set off.
Gorgeous sunshine & a great walk. Rucksack not too heavy but a bit bulky.
Heard first cuckoo just at Loch an Dubh-Lochain - then more after that. Saw a large Red Deer stag.
Climb and descent to Barrisdale was slow but it is a great spot to camp.
V. windy with heavy showers all night. Found it difficult to sleep, always the way, first night.
Up at 6.45 and ready to go by 8.20. 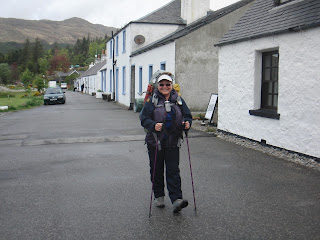 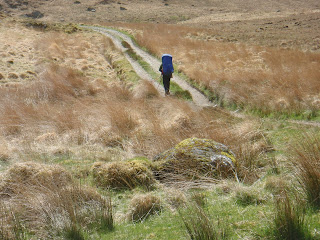 {Mike goes on his way} 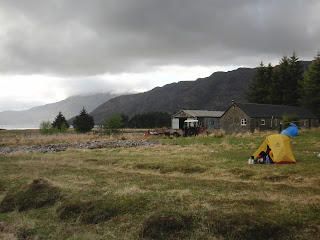 {My little yellow tent at Barrisdale - the first night}
﻿
﻿ 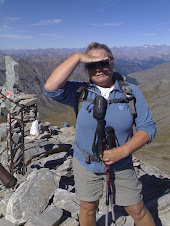